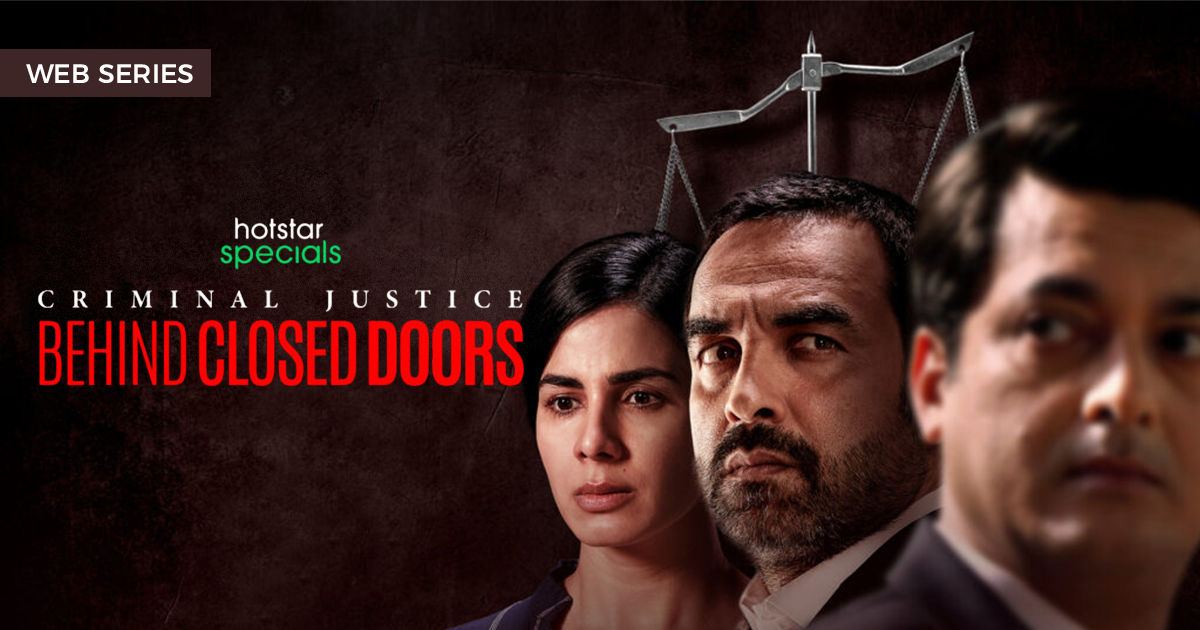 After the runaway success of Criminal Justice last year, Hotstar Specials has launched the next chapter in the franchise titled Criminal Justice: Behind Closed Doors. One of India’s most loved characters Madhav Mishra returns with what is deemed as the toughest case of his career. The prime accused Anu Chandra has confessed to stabbing her husband, an eminent lawyer – Bikram Chandra and is guilty in the eyes of law. While many believe it to be an open-and-shut case, Anu’s subsequent silence and unwillingness to defend herself begs the question – is there more to the case than meets the eye? With a bold and unexpected narrative, it seeks to find the truth and raises some pressing questions.

Reprising their roles in the show are actors Pankaj Tripathi – who effortlessly brings to life the character of Madhav Mishra, and Anupriya Goenka as Nikhat Hussain – his unlikely partner in the case. Kirti Kulhari takes centre-stage with her portrayal of Anu Chandra. Criminal Justice: Behind Closed Doors features an ensemble cast including powerhouse talents such as Deepti Naval, Mita Vashisht, Ashish Vidyarthi, Jisshu Sengupta, Shilpa Shukla, Pankaj Saraswat, Ayaz Khan, Kalyanee Mulay, Ajeet Singh Palawat, Khushboo Atre, Tirrtha Murbadkar, and others. Produced by Applause Entertainment in association with BBC Studios, this 8-part courtroom drama series has been directed by Bollywood’s Rohan Sippy, Arjun Mukerjee, and written by Apurva Asrani.
Criminal Justice: Behind Closed Doors is one of the few stories in India to showcase the life and ordeal of women in prison.

Gaurav Banerjee, President & Head – Hindi and English Entertainment, STAR India, “The response for the first chapter of Criminal Justice was phenomenal; it was our biggest show last year! With a keen focus on writing and a stellar star cast, it ushered in a new form of storytelling. Criminal Justice: Behind Closed Doors takes that legacy forward – it is a riveting drama that will grip you till the very end while raising questions on pressing societal issues. We are excited to once again partner with Applause Entertainment and hope to make this show a firm fan favourite.”

Commenting on the launch Applause Entertainment CEO, Sameer Nair, said “Criminal Justice Season 1 was the first show to launch from the house of Applause and marks the beginning of our very special and successful partnership with Hotstar Specials. The new season of this powerful franchise carries forward the key characters from the previous season played by Pankaj Tripathi, Mita Vashisht, Anupriya Goenka, Pankaj Saraswat, and others who find themselves at opposing ends yet again for a case involving a seemingly ordinary housewife caught in the web of the legal and judicial system. Halted briefly by the pandemic, this show was successfully completed thanks to the efforts of the entire cast, crew, and teams at Hotstar Specials, BBC Studios, and Applause.”

Director Rohan Sippy said, “A lot of research has gone into the making of Criminal Justice: Behind Closed Doors, and it was crucial for us to approach the storyline insightfully and sensitively. We don’t often see portrayals of women accused of brutal crimes, and this is definitely one of the few shows that probe this aspect deeply.”
Actor Pankaj Tripathi said, “It’s heartening to know that Madhav Mishra made such an impression on audiences that the makers brought him back for the second chapter – I hope that I can live up to the expectations! What I love about this character is his humility and quirk that cuts through intense moments with such humor and grace. Criminal Justice: Behind Closed Doors is a gripping show from start to finish and I think will be an eye-opener for many.”

Actor Kirti Kulhari added, “Anu has been the most challenging character of my career till date. With relatively lesser portrayals of female criminals on screen, I had to think about how I wanted this character to appear on-screen – even when the odds are against her, she does not lose her dignity and maintains a stoic silence. It’s a compelling story that will leave you guessing till the very end– It’s a great binge-watch!”

A beautiful house, a well-respected family, a doting husband, and a loving daughter – Anu Chandra had it all. This was until she is accused of driving a 7-inch knife blade right through her husband Bikram’s abdomen, leaving their 13-year-old daughter Rhea, to deal with the horror. Her confession catapults the case into a witch-hunt. As the court and the media deem her guilty of all charges, Madhav Mishra and Nikhat Hussain are once again brought together as an unlikely team on a mission to unearth the real motive behind the murder.