What is Tribhanga you may wonder? It is an Odissi dance pose that is asymmetrical, yet mesmerising much like the lives of the three female characters in Renuka Shahane’s upcoming film Tribhanga: Tedhi Medhi Crazy. Netflix recently released the trailer of this intergenerational family drama about three distinct women, essayed by Tanvi Azmi, Kajol and Mithila Palkar, and their unconventional life choices.

Written and directed by Renuka Shahane, the film takes an autobiographical route moving across timelines to delve into the dysfunctional and related lives of the matriarch Nayan, a critically acclaimed Marathi litterateur played by Tanvi Azmi; her daughter Anu, a renowned classical dancer and actress portrayed by Kajol; and granddaughter Masha brought to life by Mithila Palkar. This complex family drama of human failings and flaws is set to release worldwide on January 15, 2021 on Netflix. The film also features a stellar ensemble cast that includes Kunaal Roy Kapur, Kanwaljeet Singh, Manav Gohil and Vaibhav Tatwawaadi. 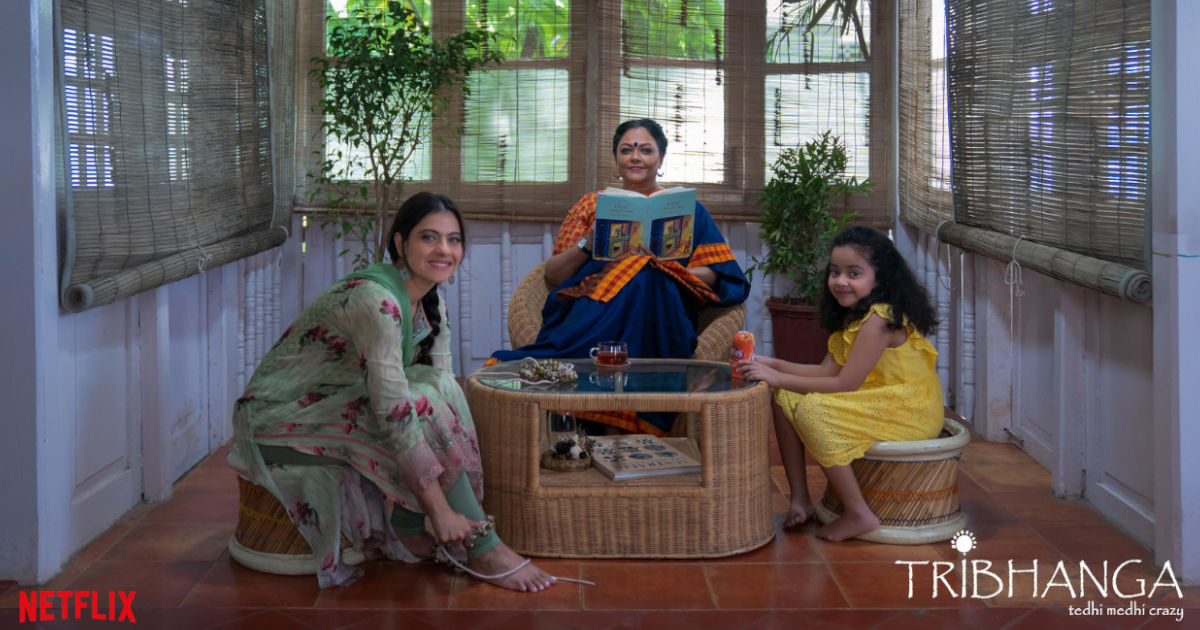 Writer and Director Renuka Shahane sharing her thoughts on the inception of Tribhanga: Tedhi Medhi Crazy, said “Tribhanga, an Odissi dance pose that looks beautiful despite its asymmetry, is used as a metaphor to represent the women in this film who have their own quirks and idiosyncrasies, and yet are fascinating, beautiful and vibrant. I believe that women who make unconventional life choices and women with a wide range of personalities need to be represented in films. The idea for this film came from my experience of meeting someone who had a very acrimonious relationship with her mother, unlike my relationship with mine. I wanted to capture the dysfunctional family dynamics when the core, the relationship with the mother, is shaky and unstable. I added three different generations to better reflect the intergenerational perspective in looking at the same event in three different ways. I am extremely happy that I could bring this story to life with Netflix and a supremely talented team of actors. Can’t wait to see how the audience across the world reacts to it.”

Kajol, playing the role of Anuradha Apte in Tribhanga: Tedhi Medhi Crazy, said, “Just like the name, the film is a celebration of women and all their beautiful imperfections. We need to embrace these imperfections and live on our own terms, just the way Nayan, Anu, and Masha do in this film. My character is outspoken and opinionated much like how the audience knows me, yet is completely different. As a mother I can vouch that there are challenges that women face daily as the smallest of things we do affect our children. Motherhood is a minefield of emotions captured extremely well by Renuka. I am very excited for the audience to see this film and hope it will resonate with people of all ages.”

Tanvi Azmi, playing the role of Nayantara Apte in Tribhanga: Tedhi Medhi Crazy, said, “This role is unique for me as Nayan might be the oldest in the family, but her ideals are not and she is constantly challenging the normal, ahead of its time. In essence, Tribhanga showcases the twisted journeys of three women who are related but could not be more different. Renuka has beautifully and sensitively captured the intergenerational family dynamics and their struggles.”

Mithila Palkar, playing the role of Masha in Tribhanga: Tedhi Medhi Crazy, said, “My character Masha is poles apart from me and this is the first time I am playing a character like this. Masha is actually the calming force among the three women. It has been such an enriching experience being a part of this film and working alongside stalwarts like Tanvi ma’am, Kajol ma’am and Renuka tai. Tribhanga beautifully encapsulates the unconventional life choices of three women and how they deal with every situation that comes their way.”